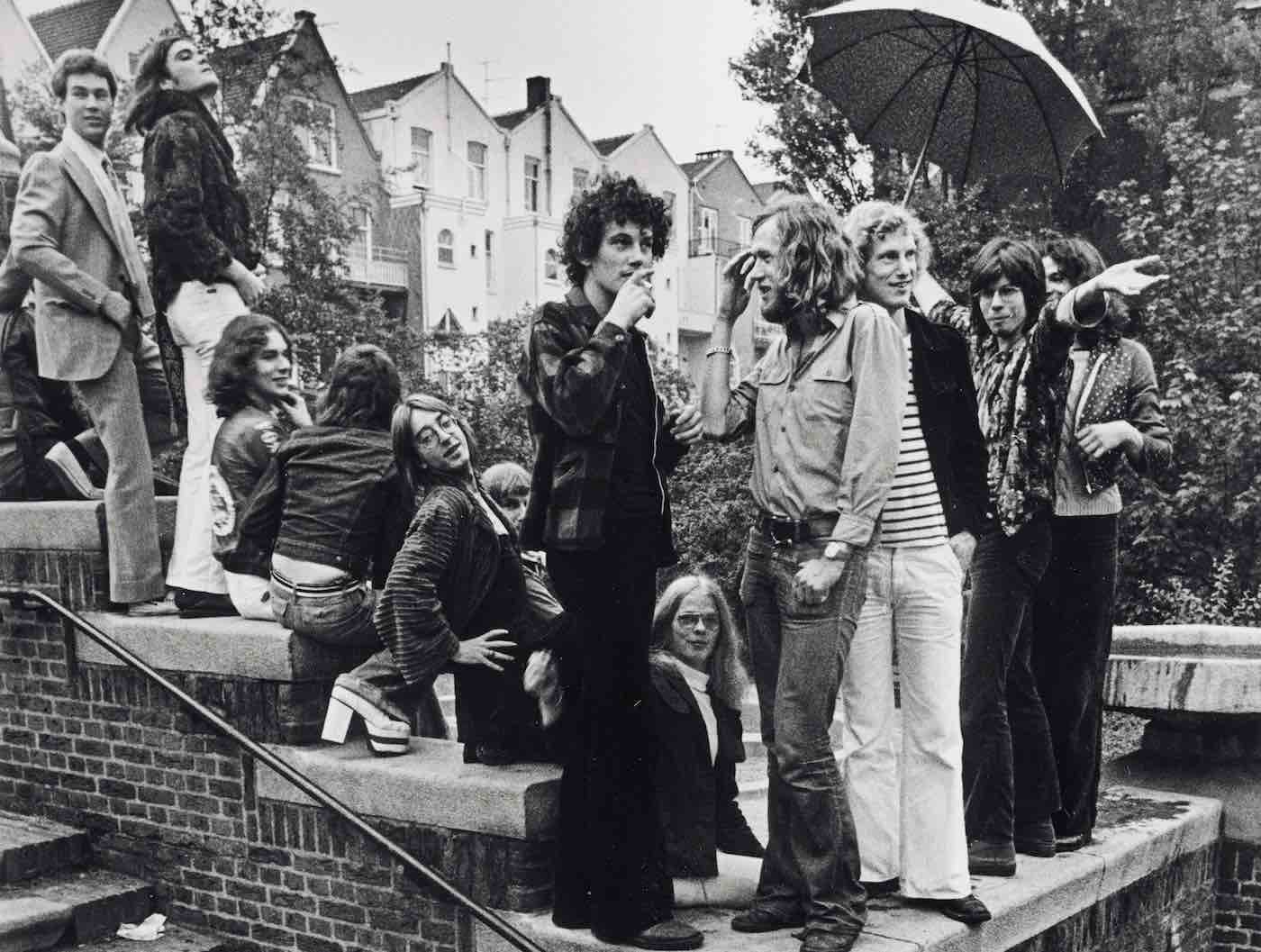 Founded around 1225, Amsterdam developed from a small village of 5000 inhabitants in 1500 to one of the world's biggest cities of 200.000 in 1700. In the seventeenth century, Amsterdam's "Golden Age", the city was the trade center of the world with the first global capitalist enterprises. It saw relative decline in the eighteenth- and nineteenth centuries but started to grow again from 1850 on. Nowadays it is the financial and cultural capital of the Netherlands with 700.000 inhabitants. From the past, it has a reputation for religious tolerance, and now also for liberal drug and sex policies.

Only public indecency was a crime wrong lovers could now be persecuted for. Amsterdam saw in the nineteenth century a slow growth of the number of such cases that mainly targeted men having sex with men. The basic principle of the new French laws, freedom in the private home, had little meaning for same-sex practices as few men and even less women with such interests could bolster a house where they could freely pursue their interests beyond the control of family and neighbours. The Amsterdam police arrested in the period 1830-1899 280 men and two women for homosex in public, and 180 men in the next decade. With a stricter control of prostitution since 1890, they also came across some meeting places of "wrong lovers" such as bars, bordello's and private homes which were sometimes raided. The growth in persecution can be explained by the growth and professionalization of the police-force and also by morality campaigns that started in the second half of the century, mainly directed against prostitution. One argument against the oldest profession was that it served as a cover for, and not as a shield against lesbian and perverted lusts.

The repressive side was only one way to produce sexuality. Since 1880 Amsterdam saw a flowering of quack and serious medical books, novels and porn for straight, gay and perverted consumers. The "Eighties" artists like Willem Kloos and Lodewijk van Deyssel took to gay themes, but more famous were Louis Couperus and Jacob Israël de Haan with their gay novels (see Dutch gay literature). The quack doctor J.Schoondermark wrote in 1894 the first booklet that asked for pity for homosexuals. Serious doctors took to the theme after 1898. Arnold Aletrino, belonging to the artistic circle around Kloos, wrote several essays and two booklets on uranism, saw it as an innate condition, and asked for pity. Most courageously he did so on the fifth Congres of Criminal Anthropology in Amsterdam in 1901 where he was fiercely attacked by the founder of the discipline, Cesare Lombroso. Lucien von Römer was the other doctor who took the homosexual case. He wrote many book-length articles for Magnus Hirschfeld's Jahrbuch für sexuelle Zwischenstufen. Both had to face denunciations by political leaders who declared for example that the University of Amsterdam where Aletrino taught and Römer was a student, promoted the sins of Sodom. The work of these authors strongly contributed to the possibilities of homosexual identification which had been nearly non-existent before that time.

The novel Pijpelijntjes (1904) of De Haan that made him loose both his jobs as teacher and journalist, is a thick description of gay life in an Amsterdam neighbourhood. The main characters are lovers but they pursue casual sex at the side, one with boys in their mid-teens. This person that closely resembled De Haan himself, picked boys up from the streets, served them strong drinks and had sex with them. The most beloved youngster was kept in a room and did not need to work. This description of same-sexual worlds without bars was realistic because there were only very few homosexual venues in Amsterdam at that time, and they changed often their location. Only in the period between the wars Amsterdam would know more stable gay locations that were strictly controlled by the police. From one of these bars, the Empire, some clients produced the first Dutch gay journal "Wij" (we). They intended as well to start a more recreational homosexual organization, but just before they assembled to discuss this initiative, the police raided the bar, ending both ventures. These bars catered mostly to a homosexual identified public that came there to meet similar-minded persons. For their sex life, they cruised the streets for "normal" men of another class or youngsters of another age (see The Netherlands). The best place were public toilets, parks and the Red Light District. In the last location, half a dozen queer bars existed, tended by lesbians who had worked as prostitutes and invested their money in an inn. They catered to a mixed public of whores, johns, faggots and dykes. The most famous among these bars was the Basket (1927) of Bet van Beeren, "Queen of the Zeedijk", a cigar smoking, gin drinking, motorbiking dyke in leather. The bar still exists but is closed to the public while a copy can be visited in the Amsterdam Historical Museum.

These bars did not disappear after the German oocupation of the Netherlands in 1940. There were even some new bars like the Monico of "Blond Saar", much like The Basket. Saar Heshof opened her pub in 1941 that was raided by the Germans. She continued the bar until 2001 and died herself in 2003. Although the Germans persecuted homosexuals fiercely in their own country, they did not do so in Holland. They introduced their anti-gay law, but it did not really lead to sharper persecutions. They had other priorities. Dutch gays and lesbians reacted to the occupation as other Dutch. Some supported the nazi's or desired the angelic blond soldiers, others joined the resistance but most stayed neutral. The artist Arondeüs who had been quite unhappy before the War, found a new zeal in the resistance and joined the group that set fire to the Amsterdam Persons' Registry that was essential for the persecution of Jews. This group that included more homosexuals, was betrayed and most participants were executed. But other gays and lesbians cooperated with the occupier.

Just before the War, some courageous gay men had started a gay journal "Levensrecht" (The right to live) in Amsterdam that had to be interrupted when the War started. It became after the War in 1946 the COC, Center for Culture and Recreation. They organized social events like dancing and lectures, and tried to convince the police and other authorities that homosexuals were decent persons. In 1953 they opened the dancing DOK that was so successful that someone else took it over in 1955, forcing the COC to start a new similar venue, De Schakel (The Link). Suddenly Amsterdam had two gay disco's many times larger as the traditional bars. These huge locales were allowed to exist by the police who rather had the gay boys dancing behind closed doors than cruising straight men in the streets. Apart from these disco's, more gay bars opened including the first leather venue, Hotel Tiemersma, forerunner of the now famous Argos. Because of the gay tourists from abroad, mainly Germans, English, French and US-soldiers from Germany, several hotels started to service a gay public. The first gay sauna opened in 1961. The growth of the gay scene worried halfway the 1960s the city authorities but the sexual revolution overtook them and their worries. Gay movement and gay world were only growing. Homosexual student activist groups started in 1967, organized disco evenings for gays and lesbians under 21 and held the first gay demonstration in Amsterdam in 1970. The same year, the first exclusively lesbian bar opened and 1972 saw the first separatist lesbian movement "Purple September" soon followed by "Lesbian Nation". The COC changed its policy. First it demanded the right to live, in the late 1960s integration, and in the 1970s socio-sexual change. Lesbians had always been members of the COC but only in the 1970s the sexism of gay men started to be adressed. The saturday in the COC-dancing became an only women evening and both lesbian and straight women got central positions in the organization.

The end of official intolerance in the 1970s created space for more gay and lesbian initiatives, ranging from all kinds of organizations inside institutions to an annual parade (1977) and a Homomonument (1987). In the 1970s and 1980s Amsterdam strongly profited from its liberal reputation, continuing to be the "gay capital" of Europe. There were new extravagant disco's with drag queens and kings and large and small parties for various sexual preferences going from skinhead to rubber. The lesbian scene grew beyond its one bar and monthly series of events and got its own disco. But even in the 1990s the authorities were hesitant to promote the gay and lesbian world because they did not like the "sex and drugs" reputation the city had. At the same time, other European cities saw a strong growth of an openly gay and lesbian world that sometimes surpassed the one of Amsterdam. The city profiled itself by a large exhibit on gay and lesbian history "Two of a Kind" in 1989, the organization of Europride in 1993 and of the Gay Games in 1998 and by annual gay canal parades in the first weekend of August since 1997.

Guy Hocquenghem (1980) labelled gay Amsterdam dowager of the 1960s, a self-confident world that belonged for him to the past. But Amsterdam has been resistent to become a dead Venice of the North, and although every decade complaints surface that proclaim the death of Amsterdam's gay and lesbian world, it has surfaced time and again. The main danger for queer Amsterdam is complacency and self-congratulation within its small tolerant world while the rest of town, country and Europe remain overwhelmingly straight.